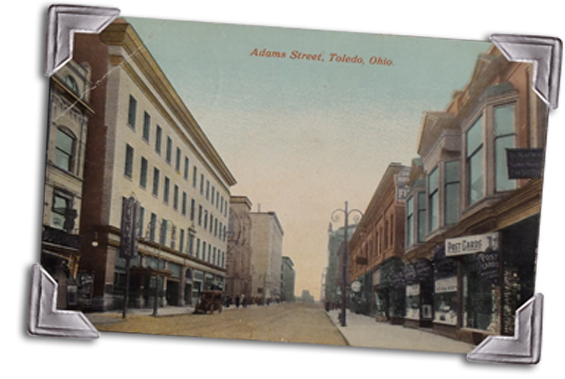 William H. Maher and Emil Grosh first met in Toledo, Ohio one hundred forty-five years ago at C. Gerber & Co., a wholesale hardware company, where they worked as traveling salesmen. Their acquaintanceship became a business partnership in 1877 when the two formed Maher & Grosh Wholesale Cutlery Co. Using skills garnered from years of experience in the hardware industry, Maher and Grosh set out with one goal in mind: sell quality, American-made products to folks all across the world.

They achieved this goal with content-specific advertisements in various magazines and journals and a yearly mail-order catalogue. Original catalogues offered wares ranging from hacksaws to fishing equipment, but over the years, Maher & Grosh became known for its cutlery products, particularly straight razors and pocket knives. What made the company’s cutlery stand out—other than the Maher & Grosh Toledo, O. tang stamp—was the ornate blade etching, which commonly displayed the company name and phrase “Razor Steel.” Today, the etching continues to be the prominent sticking point for collectors as it symbolizes Maher and Grosh’s insistence on furnishing quality and reliable tools.

The Maher and Grosh partnership continued until 1896, when Emil Grosh retired due to health reasons. William H. Maher managed the company until his death in 1913 and was succeeded by his son-in-law, Charles T. Whinery, who upheld the Maher & Grosh tradition for nearly fifty years. Then, in 1962, the company was purchased by Thomas E. Stanley and moved to Clyde, Ohio, where it persisted until 1988. The Maher & Grosh Wholesale Cutlery Co. stood the test of time for an impressive one hundred eleven years.

Now, twenty-eight years later, we present to you the rebirth of Maher & Grosh Cutlery. The revival is the result of an acquaintanceship between Roger Cunningham and Ken Mundhenk, both lifelong knife collectors. Their vision remains the same as the original founders’: provide consumers with quality, American-made knives. “New” Maher & Grosh knives are less about innovation and more about tradition, as they honor nineteenth and early twentieth century knife-making practices. Even the blades, which are expertly etched with the notable “Razor Steel,” pay homage to the past. Cunningham and Mundhenk are honored to renew an American tradition, and they proudly stand by their product, like Maher and Grosh so many years ago.